Germanys leading electric car rental company nextmove, has tested the two versions of the Tesla Model 3 in a drag race over the quarter mile against various high performance vehicles with combustion engines. The drag race on the runway of an airport in Saxony was made across different vehicle categories to cover a wide spectrum. The vehicles were selected on the basis of power-to-weight ratio and acceleration times in order to ensure close race results. 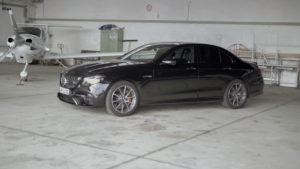 The AMG E-Class is a testimony to German engineering skills in combustion engine and drive train. Highest manufacturing quality meets the sheer power of 850 Nm of the 4 litre  twin-turbo engine. The 612 hp give the 1,955-kilogram luxury saloon an impressive power-to-weight ratio of 3.2 kilograms per hp. This makes the E-Class the most powerful vehicle in this competition. Without any traction problems, the E-Class manages the spurt from 0 to 100 in 3.4 seconds and is thus 0.1 seconds faster than the Model 3. Thanks to Launch Control, the E-Class can fully unfold its 221 Nm higher torque right at the start and sets itself apart from the Model 3 after a few metres. The Stuttgart sedan can slightly extend this lead during the race and manages the quarter mile in 11.61 seconds. The lead over the Model 3 was 0.18 seconds. This performance has its price: With 170,000 € this E-Class is about 100,000 € more expensive than the performance version of the Tesla Model 3.

The performance version of the Tesla Model 3 combines the comfort of a family sedan with the performance of a sports car. In just 3.5 seconds, it accelerates faster to 100 km/h than the performance versions of the AMG C-Class, the M3 from BMW or the Audi RS 4, which take just over 4 seconds to accelerate to 100 km/h. From a standing start, the electric motors on both axles develop a torque of 639 Nm, which catapults the Tesla past its competitors in this vehicle class without any traction problems. At 4.1 kilograms per horsepower, the Performance Model 3 has an outstanding power-to-weight ratio. The Tesla Model 3 Performance finished the quarter mile in 11.79 seconds and thus achieved second place. A software update for the Tesla Model 3 was announced by the manufacturer at the beginning of March to further increase the performance parameters. 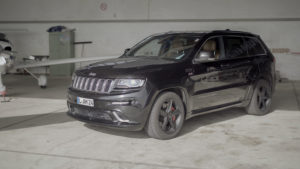 Brutal American power – that’s what the 6.4L Hemi engine of the Grand Cherokee stands for. With 2.4 tons, the American SUV is by far the heaviest vehicle in this drag race comparison. The 468 hp nevertheless give the Jeep a competitive power-to-weight ratio of 5.2 kilograms per hp. This puts it between Tesla Model 3 Performance (4.1) and Tesla Model 3 RWD (6.0). Thanks to its all-wheel drive with 624 Nm torque, the American heavyweight finished the quarter mile in an impressive 12.78 seconds. 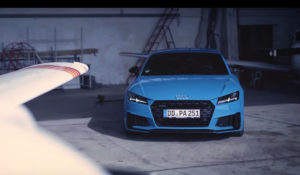 The Audi sports coupé is in a comparable performance range to the Tesla Model 3 RWD and AWD. In terms of price, it also plays in a similar league. As a two-seater, however, it offers only limited space and cargo space. In the all-wheel-drive version with double-clutch transmission and in combination with Launch Control, it is on a par with the Tesla Model 3 in the 0-100 km/h sprint. The sports coupé finishes this spurt in 5.2 seconds. The low combat weight of only 1.5 tonnes gives the Audi TT a power-to-weight ratio of 6.2 kilograms per hp and is therefore comparable with the Tesla Model 3 RWD. The Audi managed the quarter mile in 13.67 seconds. 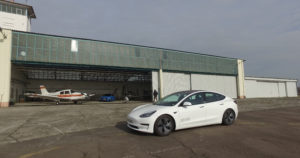 The Tesla Model 3 with rear-wheel drive (RWD) is in the premium mid-range sedan class. In terms of size, equipment and price, it is comparable to the Mercedes C-Class, BMW 3 Series, Audi A4 limousines. With 5.1 seconds from 0 to 100 km/h, it is comparable to sports coupés in the lower performance classes. The power-to-weight ratio is 6.0 kilograms per hp. The Model 3 took 14.07 seconds to complete the quarter mile in this drag race. The Model 3 that took part in this test is equipped with a KW Variant 3 suspension. 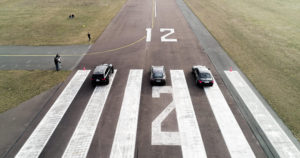 The quarter-mile is considered the standard for the acceleration comparison of vehicles. The Drag Race took place on 20 February 2019 at the Air Park Riesa in Saxony. The 950-Meter-Landebahn of the airport offered the track for the acceleration race. The outside temperature was 6 degrees Celsius and the track was dry. All vehicles were fitted with winter tires and were warmed up in advance. The state of charge of the Tesla was over 90%. The measurement was carried out with drag race equipment from Dragy.